Saturday, April 01, 2006
The New Place This place will be available as a disaster back-up and I'll be cross posting for a the rest of the month, but after this past week I'm moving to:

You will be taken to the new site in a couple of seconds.

It is a Wordpress site on my own server and, other than a single month, my archives are there and working. The look is a little different and it uses the built in comments for now.

It would have been up yesterday, but Blogger refused to cooperate.

Forget looters, sightseers should be shot on sight. They aren't helping; they are clogging up the roads; they are using things that are needed; and nobody needs strangers showing up to gawk - that's the media's job.

Ergon Energy is the local power company and they are amazing. They have delivered generators to supermarkets to get them back up, while they go about repairing the grid. That is an obvious move, but I don't know of a single utility on the Gulf Coast that has ever suggested doing it.
3/25/2006 07:38:00 PM | Permanent Link


Internet Neutrality The Christian Science Monitor wants to know: Whose Internet is it, anyway?

"Net neutrality" simply means that data - a phone call, an e-mail, a video - can travel freely over the Internet without the interference of those who own parts of the pipeline. Those transmitting it shouldn't discriminate as long as the content is legal and doesn't damage the system.

The phone companies argue that competition between carriers will prevent abuses. If customers feel unfairly treated by one provider, they can switch to another.

But no such competition exists. A handful of cable TV and phone companies control the lion's share of US broadband Internet access. Many consumers have no choice among broadband providers. The acquisition of Bell South by AT&T, now under way, shows that competition is shrinking, not expanding.

The so-called competition in my area is between Sprint and Cox Cable. No one should be surprised that both market TV, telephone & Internet packages with a total price difference wouldn't buy a pack of gum.
3/25/2006 07:36:00 PM | Permanent Link


The Friday Dump? The Federal Elections Commission has the new Internet rules on the agenda for its meeting on Monday.

CNet is reporting that the Election commission takes light touch with Net regs. It doesn't look that onerous, but there really hasn't been an explanation for the need.

The 'Net is generally self-regulating. If you do something that a consensus feels is beyond the pale, you will receive punishment as soon as you are found out. No one has forgiven the "hired bloggers" that Thune used, and he will be punished for that. The "hive memory" is never wiped and anyone can find the relevant information with a search engine.
3/25/2006 07:35:00 PM | Permanent Link


Friday, March 24, 2006
Belarus Update First, when John IV took the title of Caesar [Tsar] it was "of all the Russias" because there are three. Russia, Belarus, and the Ukraine are the three Russias. Belarus is not some modern construct, it is a very ancient nation that has connected then disconnected from Russia multiple times over the centuries.

The government of the modern version has more in common with The Sopranos than The West Wing, although I admit that the president's son hasn't gunned down anyone else in a bar recently.

As predicted, Lukashchenko was reelected in a process that no one believes was free or fair. There are a lot of people in rural areas who haven't quite accepted the fact that they are no longer in the Soviet Union and would have automatically voted for the current officials because that is what they had always done, and it is possible that Lukashchenko could have won if the election had been free, but he didn't want to chance it.

As occurred in the flawed election in the Ukraine, people camped out in a main square of the capital city, Minsk in this case, to protest the result and there is a major protest scheduled for tomorrow, but the security forces, still called the KGB in Belarus, swept up all of the protestors in the middle of the night.


Testing For Thee, But Not For Me R. Neal at Facing South writes about one of the many Republican hypocrisies concerning education: Florida double standard for voucher students.

Left on their own, the only thing the Republicans have done is institute a testing regimen, the FCAT, which they can use to justify a voucher system. The vouchers keep getting thrown out by the Florida Supreme Court, and the Republicans keep coming up with new versions.

Since they are not allowed to directly fund the Christianist madrassas for their fundamentalist masters, they indirectly fund them with vouchers. As R. Neal points out there is no oversight at all for these schools, but they are receiving tax money
3/24/2006 10:44:00 PM | Permanent Link


The Season Of Love The Alligator Crawl Season has begun, and all of those fools who thought it was "cute" to feed 'gators in a local waterway are going to find out which ones are male.


Cognitive Dissonance It was alright for the UAE to operate our ports, but an Israeli company, Check Point, should not be allowed to buy a security software company used by the Federal government?

Actually, foreign companies should not be allowed to own any of our security infrastructure, and the best way to prevent that is to stop privatizing these functions and bring them back into Federal ownership.

The defense of the nation is one of the few things that the Constitution lists as a function of the government.
3/24/2006 09:16:00 PM | Permanent Link

There is a very fine line between democracy and mob rule. It takes experience and peace to see it, but only a loud and persuasive voice to make it disappear.


A Missed Opportunity The Washington Post just blew it. They had an opportunity to generate some more traffic to their site and receive the benefits of those increased ad revenues and they blew it.

At the end of 60 Minutes in the 1970s you didn't see Andy Rooney, you saw Shana Alexander and James J. Kilpatrick in verbal combat in the Point-Counterpoint segment. That segment became such an icon that it was parodied on Saturday Night Live's fake news Weekend Update by Jane Curtin and Dan Aykroyd.

The Post could have provided the same dynamics with a red state versus blue state version. Two bloggers , one from each side, going after each other on one site. They could have staged occasional grudge matches featuring guest bloggers on a single topic with a on-line poll tied in to determine the winner, like Oxford debates. That would generate traffic. That would generate income.

There are real writers with genuine ability and strong political beliefs who would have willingly accepted the offer. People with authentic credentials and portfolios to prove they know how to write to deadline. A salary and passwords would be the expense, as blogging is an obvious telecommuting job.

What they did was hire a hapless kid who tried to bluster his way through a job he wasn't qualified to do. The Post lost massive amounts of credibility for their attempt, which was already in short supply after the Howell incident.

If the Post thinks the Stalinist red state bloggers are going to appreciate the effort, they haven't been reading the blogs. The red staters are already spreading the meme that the Post did this on purpose to damage their standing as part of a liberal plot. 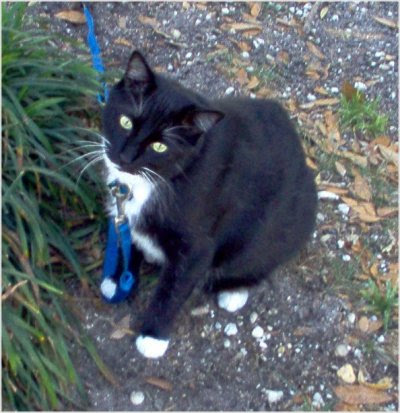 Yes, I am the biggest cat in town.

[Editor: Ninja is 2 to 3 inches taller than Sox at the shoulder and 6 pounds heavier.]

On-line Opinion Magazine featuring annoyed rumblings from the leading edge of the Baby Boom firmly tied to a reality-based world.

Home on the 'Net